The big trend in American evangelicalism: the multi-site video-venue church. It promises to leverage the teaching acumen (not to mention star power) of big name preachers to extend the Kingdom of God.

Has anyone stopped and asked, “What in God’s name are we doing?”

Think about it – we started the Reformation over one man having too much authority in the Church, yet today hundreds of thousands meet in “multi-site” video venues watching preachers like Mark Driscoll or Craig Groeschel or Perry Noble in a box. The new gold standard of this movement is 3D holographic Andy Stanley, complete with security to keep people from going up on stage to play with it…or him. 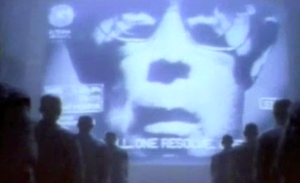 Think about it while detaching yourself from your favorite multi-site, mega big-box preacher: Isn’t hitching ourselves so fully to one man’s teaching just a little odd? Doesn’t it smack, just a tad, of man-following? Even idolatry?

And, if “it isn’t about me,” as one multi-site preacher is fond of saying, then why not take your nine sites and train up eight new young preachers? Wouldn’t that be a healthier model? What happens to the church if the guy it “isn’t about” gets hit by a bus?

I am not saying that these preachers are not really, really great communicators. I am not saying that they wouldn’t be great guys to get a beer with and talk football or soteriology. But what does it say about us that we spend a million dollars to make Andy Stanley into the Sunday morning version of Tupac at Coachella?

How is this not worse than what we condemn our Roman Catholic brothers for? I don’t know a single Catholic that would be ok with the Pope being piped in for the sermon every Sunday. They laugh at the idea. I know. I asked.

How is the evangelical world embracing 7-10 brand-name preachers across the country not the ecclesiological version of GMO crops? Let’s just call it like it is: these men are de facto evangelical popes.

Some will say, “Yeah but Mark Driscoll and Perry Noble don’t speak ex cathedra.” Really? Their devotees quote them as if they do. In a nod to mega-pastor Steve Furtick’s statement, that they are “making Jesus famous,” doesn’t it seem as if Jesus isn’t the only one they are “making famous”? Not to mention rich.

To be clear, I am not attacking large churches, or video screens. I am not even attacking the bloated clergy salaries paid by churches whose boards are made up of other mega-church pastors – although someone should. I AM attacking a model of leadership: The multi-site, big personality church that trades the Ephesians 4 model of equipping others and giving leadership away for a model that makes “the man” a black hole of money and Kingdom energy.

Evangelicalism’s strength has always been its willingness to engage the culture to make an impact on lives. The backside of that coin can be an amazing short-sightedness. Does no one wonder what the unintended consequences of our new evangelical popes might be?

So before we cast stones at our Catholic friends for man-following, perhaps we should remove the video screen from our own eye.

61 thoughts on “When did evangelicals get popes?”