The first Christian creed was, “Jesus is Lord!” (Mark 1:1)  This drew a hedge around what it meant to be Christian…and since it was a play on the Roman creed, (“Caesar is Lord!”) it did this by being a bit prickly to those who were not.

But Aren’t All Religions Basically the Same? 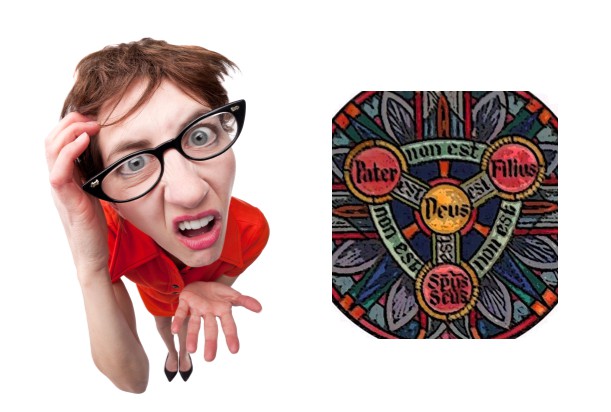 This is the mantra of the day-repeated often enough to be assumed uncritically. Unfortunately, the world’s great religions are not at all the same. Each makes individual faith claims that stand (or fall) on their own merits. To say anything less is deeply dishonoring to the world’s great traditions. Every one of the world’s major religions does, however, seek to answer 3 core human Questions:

The Christian answers, by the way, are;

All of which lead to the one really big human question: What about me? Christian Answer: We follow God by faith, living a life of gratitude toward God and faithful service to the world (John 1: 12, Eph 2:10).

The Apostle’s and Nicene Creeds very carefully only answer the first question. They stay on “Who is God?” That is the nature of a creed. Creeds assume that if you get the “who” right, everything else will fall into place. That focus on the “who” is what makes creeds different from confessions. Since creeds are the least you can belief, churches that cannot endorse the Nicene Creed, like the LDS or the Jehovah’s Witnesses, are not considered Christian churches. This is not personal. It is not meanness. It is simply that to not be able to endorse the Nicene Creed means we are talking about different Gods. As we said in our last post, creeds are the broad fence around the very least it means to be a Christian. A lot of groups fit into that playground: Catholics, Orthodox, Protestants, Pentecostals, Copts…anyone who holds to a trinitarian view of God. It is only these late theological innovators that do not wish to enter the fence of the trinity to whom Christians say, “We are sorry. But change your mind on the Trinity and come on in!”

The shape of Creeds: A Trinitarian Narrative

At their most basic level, creeds do not express a systematic theology but a narrative one. As I said in the previous post, the creeds give us the interpretive framework from which to view the Christian story – a new story within which to orient our lives. The Christian story, in a nutshell, is that God, dwelling in triune love, desired to share his great love and so created. Taking love for granted, we wandered. God, unwilling to let us go, moved into the neighborhood in the form of Jesus, showed us a vision of a kingdom to come, and went to the cross to redeem us from our sinful God-rejection, walked victorious from a tomb 3 days later, breathed on his own 4o days after that, and went to heaven where he “ever lives to make intercession for us” (Heb. 7:25). From there he will someday return to make all things right. Humans are now invited into that divine love through the plan of God, the work of the Son, and sanctifying action of the Holy Spirit.

So the next time you say the creed. Don’t just say it. Pray it.

4 thoughts on “Aren’t all Religions are basically the same? (Creeds for Newbies, Episode 3)”