Last year the church that kicked off the California suburban-megachurch movement, the Crystal Cathedral, was sold to the local Catholic Diocese. The decline is being seen in an attendance drop off among 20-somethings in most suburban model churches…and many leaders in those churches report that they are nervous… 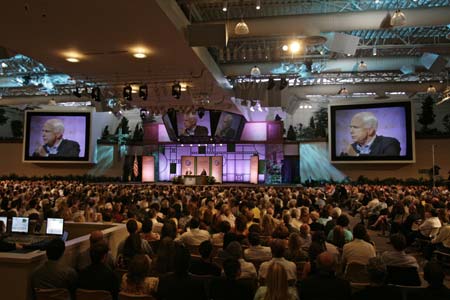 Church leaders have spent a decade wondering why the Seeker-Relevant-Saddleback-Mega-church model that works so well for upwardly mobile people 35 and older, is not working for people under 30. I believe the answer is deceptively simple: The world changed.

Ask yourself, “What world-shaking event occurred when today’s 25 year olds were early teenagers?” The answer: 9/11.

On 9/11 our fundamental understanding of what life was like changed. Forever.

Put yourself in the mind of an over 35 year-old: In the formative years of those over 35 the world was a pretty nice place. A safe place. We knew that if we worked hard and got an education we would have a good job, make money in the market, move up the social and economic ladder, and retire comfortably on our 401k, the appreciation of our homes and Social Security. We were confident. Our viewpoint: The world was our friend.

Take a 25 year old today: In their formative years the world was not a very nice place. They do not remember an America that was not at war. People they have never met want to bomb their buildings and crash their airplanes. If they work hard and get a good education, they may work at Starbucks and will spend 20 years paying off student loans. The market is a risk and home ownership might be a loser. How can they risk being tied to a home with fluctuating value when they will have to change careers and locales multiple times? There will not be a pension. Their 401k is a crap-shoot. Social Security will be bankrupt. Will they ever retire? Their viewpoint: The world is not their friend.

The “Seeker” movement works for the 35 year old specifically because it is based on the premise that the world was our friend. On that premise we built churches modeled on the best the world had to offer – it was the church as Christian subculture: a shinier, happier version of everything secular. Think of what we imitate in our “relevant” church models: coffeehouse, concert hall, comedy club. They are all based on the idea that the secular world is a friendly place. Since, for 20-somethings, the world is definitely NOT their friend, we really shouldn’t be surprised when that secular model is not a big winner for them as “church.”

Author Dan Kimball noticed the beginnings of this cultural shift ten years ago in “Emergent Church.” In an attempt to reach unchurched millennials in Santa Cruz, California he assembled focus groups. He took them to different church environments. He found consistently that young adults wanted a church that was “churchy”…Ancient. Quiet. Solid. Holy. A place unlike the world. A place of “otherness.” Do you notice how those things whisper stability in an unpredictable, ever-changing world? Kimball’s young adults were actually surprised that the older crowd preferred “relevant model” churches. Their take: “If I wanted to go to the mall, I’ll just go. I want church to be church.”

How can the church engage the post-modern 25 year old? Certainly it isn’t easy. This generation is conflicted. On one hand they distrust large events. On the other, they flock to things with momentum. The good news is that today’s millennials seek the things from the church that the church did well for most of her 2000 years: community, a chance to make a difference in the world, and, most importantly, offer a transforming connection with the creator and redeemer of the universe. Unfortunately, we lost these as they eroded invisibly out from under the evangelical suburban cultural veneer. It is not too late. But it will take a new kind of church that is much less like the one we know and much more like the one the early fathers knew.

The big question is not whether the millennials will engage, but will the previous generations, builders of a church that fit a set of cultural expectations that are rapidly fading away, listen and respond by opening leadership opportunities to the next generation? Will the church develop new leaders, give legitimate responsibility to the next generation, and take new chances on historic ways of being the church?